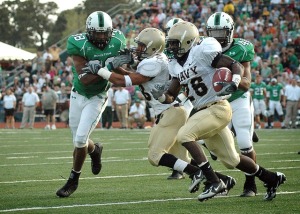 Do you like college football? I certainly do. And so does new author Candee Fick. In fact, her new novel is set in the always-exciting college football world.This intrigued me, so I invited her to share with us a little about her new release and the hot topics it addresses.

First off, can you tell us about the premise of your debut?

Catch of a Lifetime is an inspirational romance about a first year college football coach who wants to win and the football-hating graduate student athletic trainer who has to work with the team. Of course, romantic relationships between staff and students are discouraged and they must keep their growing attraction hidden behind a wall of professionalism in order to avoid a scandal.

Sounds intriguing. Did you have a message you wanted readers to come away with?

I wanted to show a real example of how people look at and judge each other based on the outside, but God sees the heart. While my heroine’s opinions about football change as she gets to know the individuals on the team, headlines over the past year indicate that our nation still wrestles with broader stereotypes and prejudice based on race, political party, moral convictions, and even career choices like law enforcement.  Unfortunately, those damaging and divisive stereotypes are often rooted in the poor behavior of specific individuals.

Can you think of an example?

Take, for instance, a narcissistic football player. His athletic skill may have propelled him to the limelight and then he starts to believe the world revolves around him. That every ball should be thrown to him so that he gets the statistics and credit. That every girl on campus should be begging for his attention. That the rules don’t apply to him. After meeting such an egomaniac, one could assume that all of the other players on the team feel the same sense of entitlement.

However, just because a team has such a player (or two), doesn’t mean everyone on the team is that self-absorbed. Some, in fact, are hard-workers with personal integrity and a strong sense of right and wrong. While my heroine learns to not judge the whole group by the actions of one, it was also satisfying through the course of the story to have the narcissist suffer the natural consequences of his behavior and get taken down by the good guys.

Nice. So, your book touches on negative stereotypes and narcissism. Any other hot topics?

How about sex? Or rather maintaining sexual purity despite temptations and external pressure? My hero and heroine had to work to keep their attraction to each other within the safe boundaries of their personal faith convictions and I tried to give an honest picture of their struggle in the context of a college football environment. However, as one reviewer already pointed out, I ended up also showing readers practical solutions like accountability and staying in public places. I believe that’s the purpose of touching on a hot topic … to meet readers where they are and leave them with hope. 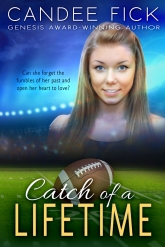 CATCH OF A LIFETIME: He breathes football. She shudders at the very mention of the sport. After a tragedy involving a football player destroyed her family, athletic trainer and graduate student Cassie moves across the country looking for a fresh start, but a change in financial aid lands her in the middle of her worst nightmare. Meanwhile, rookie coach Reed worries his dream career will slip away as injuries plague his players and his star receiver teeters on the brink of ineligibility. As the two work together to salvage the season, sparks fly, and Reed must eventually choose between the game he cherishes and the woman he loves.

Candee Fick is the wife of a high school football coach and the mother of three children, including a daughter with a rare genetic syndrome. When not busy with her day job or writing, she can be found cheering on the home team at football, basketball, baseball, and Special Olympics games. In what little free time remains, she enjoys exploring the great Colorado outdoors, indulging in dark chocolate, and savoring happily-ever-after endings through a good book.

Click  here to purchase or get a sneak preview.

Thank you, Candee, for visiting my blog today!